Everything is bigger in Texas – especially football. With large team rosters and serious competition, infection prevention is one of Coach Paul Ressa’s top priorities.

Coach Ressa started his career in the Dallas Independent School District (ISD) before transferring to Carrollton ISD in 1996. Over the past 26 years, his passion for teaching science and special education also led him to take on a variety of coaching roles, including baseball, football, track, softball, and now football. As head coach of Newman Smith High School, Coach Ressa noticed staph infections running rampant and implemented a strict disinfecting regimen using Sports-O-Zone – which eliminated the problem.

Now, Coach Ressa is working as an assistant football coach at Denton Ryan High School, and is one of over 15,000 Texas high school coaches that will descend on San Antonio for the THSCA conference, aka Coaching School.

What sanitizing options were available to you before Sports-O-Zone?

Before I got to Newman, they were just using the disinfectant solutions that the district provides, and I’m not sure if they were using it with regularity. Once I came in, we put in the work to make sure the kids’ area and equipment were absolutely clean. Not just washed, but sanitized and safe to use.

How difficult was it to sanitize gear and prevent infections before using Sports-O-Zone?

When I took the job at Newman Smith, they had a huge issue with staph infections. Staph is everywhere, and it was really, really tough for them, especially in 2005-2006. Carrollton ISD does a good job, and they provided all the high schools with Sports-O-Zone machines, but you have to be diligent and use them to solve the problem. We started sanitizing weekly and had zero problems after that. We completely eliminated staph during my tenure from 2017 all the way to 2021.

How often does an infection bench a player?

I don’t know, to be honest with you, because we completely zeroed it out. I will say a staph outbreak nearly shut down the program for a little bit right before I took over, but now I don’t even have to worry about it. If somebody does have a staph infection, it comes from outside the school. But this is why we made sanitation one of our main goals so that kids don’t lose out on playing time because of something we can easily prevent.

What is the biggest benefit of using Sports-O-Zone?

Like I said, by keeping everything clean, the kids understand that we’re not going to lose time again due to an infection that we can control. It’s especially helpful in keeping our work environment clean. Coaches spend an exorbitant amount of hours in the field house, confined to small areas at times, so we have to make sure the coaches aren’t getting sick also. Because if coaches get sick, it’s kind of a waterfall effect. With the school short on teachers and subs hard to get these days, the whole school is affected.

Sports-O-Zone kind of heightens our awareness and keeps us on guard to keep facilities clean. It gives everybody a sense of pride too because you can bring any parent in here to look around and they’ll see the kids and coaches are doing what they’re supposed to be doing. So if you’re using the product and doing it right there’s definitely that sense of pride.

What advice would you give to other coaches that are struggling to keep their gear and locker rooms disinfected, sanitized, and safe for their players?

Specifically for our field houses and wrestling rooms, we bought an additional product, the Gear Blaster, and it absolutely changed the game. For wrestling mats, you do your common wash downs and things like that, but you can just roll this machine in, set it for however long you want, and leave for the night and it’s ready to go when you come back in the morning. We use Gear Blaster in every locker room in the field house and in the equipment room. There are a couple of products out there that really, really work, and they’ve been absolutely magnificent for us and for Carrollton to stem our problems with staph.

You’re attending the THSCA convention later this month. What are you most looking forward to?

As I approach that 30 year mark, Coaching School has always been the kickoff for the season. Unless you’re in coaches’ meetings, you’ll be at Coaches’ School. Everyone has aspirations for the season and plans to grind to make it all the way to December 17th. It’s such a good time to take a deep breath and talk with a bunch of guys who you haven’t seen in a year sometimes, and you see how they’ve moved on or gone somewhere new since then. You just get to be real human beings with the same people that you’ll be in competition with week in and week out, whether they’re in your district or you’ll coach against them in the playoffs. So I’m really looking forward to reconnecting with a lot of faces. 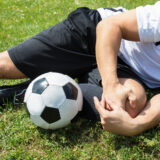 Best Practices to Sanitize Your Gym
previous
How Athletic Trainers Can Advocate for Athletes’ Safety
next
Back-to-School Prep: How To Prevent Illness and Infection